Last week I committed some code changes and artwork for KGoldrunner to SVN. This is something I was planning to do for some time, but the lack of good open source tools for animating SVG directly slowed me down quite a bit. I ended up using a commercial package (ToonBoom) to prototype the runner animation: it does not support SVG, but it has nice support for skeletal structures, so you draw the body parts and then animate their position using pivots, in a process usually called cut-out animation.
But ToonBoom can not export the results directly to SVG, only to Flash, or image sequences… So in the end I kind of used it only for prototyping the movement, and then exported everything as a PNG strip, just for reference.
In the end, I re-did all the body parts in Inkscape, and used groups to structure the runner as a 16-segment figure. These are cloned and positioned/rotated to generate the frames, so hopefully it would be easier for other artists to add variations of the character: just edit the original shapes, and the clones will update automatically, keeping the animation more or less intact.
Here is a screenshot of the runner and enemies frame sequences in Inkscape: each one has 36 frames at this time:

And here you can see the enemy carrying a gold piece more closely, very funny:

There is still some work to do, we are going to integrate new backgrounds and other elements to the final game before KDE4 is ready. Notice how the runner and enemies are small in the final in-game version: this is one of the reasons why it was so difficult to animate them, as small details are lost. Checkout kdegames in SVN to see them in action. 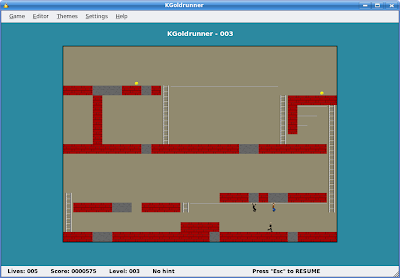 Ah! And of course, the old themes are still there, for the nostalgic.