Dmitry Suzdalev has been working on a KReversi rewrite for a couple of weeks, and the results have been recently merged to the KDE4 trunk. There were several goals with the rewrite, including (but not limited to!) the revamp of the UI, chips animation and artwork.

The previous version used png pre-rendered versions of the chips, with the default being the red/blue version. I redrawn the chips in Inkscape, so the art is now entirely vector based. Well, not *entirely yet*, but it will be, after we update the backgrounds 🙂 Gladly I had the original raytraced versions as a reference, but recreating the light effects with layers of gradients was not exactly easy to achieve! I am very satisfied with the results, though. You can see below how the new chips look side-by-side with the older version: 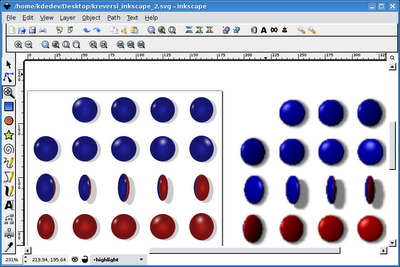 I also worked on an enhanced version of the black and white chips, shown below. The original ones did not have enough contrast, they were just an unsaturated version of the default red/blue ones. 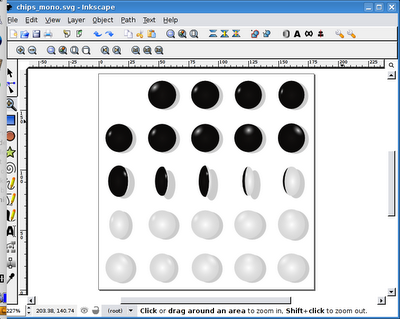 The black and white chips will probably be the default in KReversi for KDE4, according to Dmitry (and following a suggestion by Inge.) I never heard about red and blue reversi chips anyway 🙂

As for code changes, Dmitry is adjusting the difficulty levels, among other enhancements to how the game plays, specially for beginners. The move list pane is now optional, and can be hidden to free up space. Under the hood the code was ported to Qt4 and the drawing routines are now using the new QGraphicsView framework. If you have suggestions for KReversi please build the game from SVN, send your comments, and I will forward them to Dmitry. Or post to kde-games-devel.